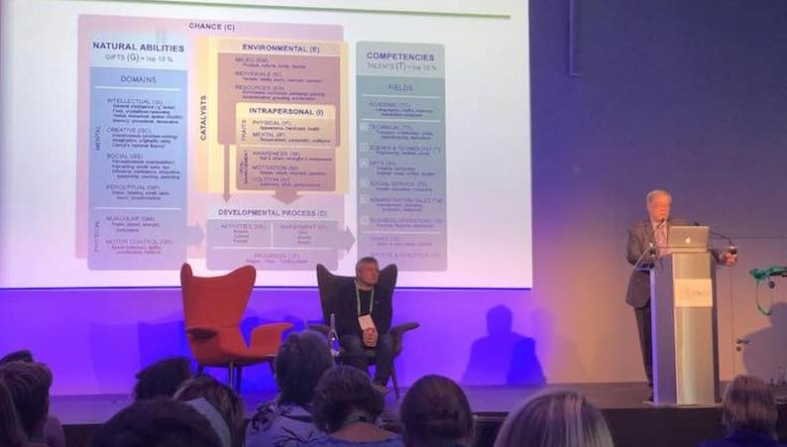 Professor Françoys Gagné is a French Canadian from Montreal, Quebec. He obtained in 1966 his Ph.D. in Educational Psychology from the University of Montreal. Dr. Gagné has spent most of his professional career in the department of Psychology at l’Université du Québec à Montréal (UQAM).

After a decade of research on student evaluations of teaching, he became interested in talent development in the late 1970s. Although his research brought him to study a variety of subjects within the field of gifted education (e.g., attitudes toward the gifted and their education, peer nominations, developmental profiles), he is best known internationally for his theory of talent development, the Differentiated Model of Giftedness and Talent (DMGT).

Professor Gagné has won awards in the field of gifted education, among them NAGC’s prestigious Distinguished Scholar Award (1996), and two awards from the Mensa Society. Although retired from his UQAM professorship since 2001, Dr. Gagné maintains international publishing and keynoting activities.

The Academy of Talented Youth East met prof. Gagne at the ECHA conference in Dublin, august 2018. We discussed giftedness, talent and the five Ps.

ATY: In your opinion, what are the common characteristics of talented youth? Can you mention five?

Prof. Gagné: If we look at The Differentiated Model of Giftedness and Talent, it presents the talent development process as the transformation of outstanding natural abilities, gifts or aptitudes into outstanding systematically developed skills which defines expertise or talent in a particular occupational field. Most talented children and young people have high aptitudes – the aptitudes can be either physical, creative or intellectual. In other words, they have a high level of potential.

The second characteristic is intrapersonal catalysts such as interest and passion, which belong to the motivational aspect of human behavior. Interest and passion are the energy that fuels the daily learning and practice.

Another very significant characteristic is conscientiousness, which implies a desire to do a task well and to take obligations to others seriously. Conscientious individuals tend to be efficient and organized, to show self-discipline and aim for achievement. They are generally hardworking and invest more energy in a given task. And since most talented children and youngsters have the ability to remember easily, they can pick up more information and the learning process becomes more rapid then for the average children and young people.

As the last characteristic I will mention autonomy. Roughly described, it is the capacity of learners to plan and execute their learning program with a minimum of outside pressure from parents or teachers and to assume full responsibility for their progress or lack of progress. In other words, self-management.

The characteristics can be thought of as the five Ps:

ATY: If you should single out the main external drivers for development of talent, what would they be?

Prof. Gagné:The environment often plays a significant role. It can be a teacher, a parent, a peer-group or a mentor; someone who has seen the aptitudes and talents of the child or young person. Someone who has pinpointed the person and got an idea of the level of his or her talent. Then we can start focusing on enrichment and talent development.

My best example is from sports. If a child or young person shows any aptitudes, he or she will soon be put in an environment that is enriching – a special team or an advanced team, and they will move up at the pace of their knowledge. In Quebec, one of our most famous divers, who won Olympic medals in everything, began diving at the age of four. Already at the age of two his parents observed an incredible proprioceptive ability, and they kept placing him at the limit of what he could do. Always challenging him. Talent development helps people exploit their potential. We need to focus on giving them a chance to do their best.

Gagné summarizes that it is important to acknowledge talents. To acknowledge that the needs of the talents are different – they do not need more of the same, instead they need enrichment of their regular curriculum.

The Differentiated Model of Giftedness and Talent

Below you find The Differentiated Model of Giftedness and Talent. In short it shows how talent in a particular field emerges during a long developmental process that has its foundations in remarkable aptitudes (the gifts), and benefits from the constant influence of intrapersonal as well as environmental catalysts. 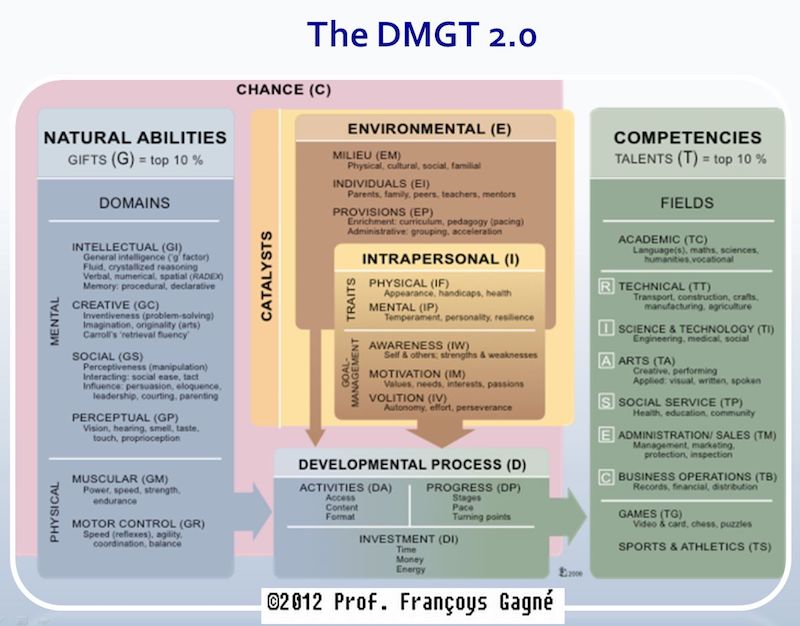 You can read more about Professor Gagné’s research here